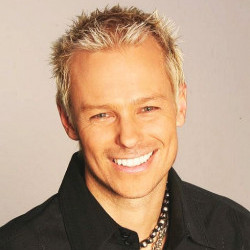 "Do what you can, with what you have, where you are. First we form habits, then they form us. Conquer your bad habits, or they will eventually conquer you. Imagine you only have one year to live. What important things would you be doing? How would you be allotting your time to accomplish the most you could? This exercise is one method of going after your priorities."

1994-1999: Anthony produced and starred in his own dinner show at the Hotel Nikko Guam which quickly became the hotel’s top money-making venture and one of the most successful tourist attractions in the Pacific Islands.

May of l999: Anthony received international recognition when he was invited to perform his amazing illusion “The Drowning Pool” on NBC’s prime-time show “The World’s Most Dangerous Magic II.”

After returning to the U.S., Anthony was a favorite featured performer alongside the Osmond Brothers and Tony Orlando at Branson’s Osmond Family Theater for 3 successful seasons.

In 2001, Anthony was asked by Baldyga Group International to open and star in their newest venue, SandCastle Saipan.  This exciting show opened in May 2002 and ran through May 2006.  Anthony enchanted his audiences with his surprisingly unique style of illusions and exotic birds alongside SandCastle’s signature Royal White and Orange Bengal tigers.

After a 2 year successful touring show across the United States and featured performances in Las Vegas, Anthony was again asked by the Baldyga Group International to breathe new life into their largest property. Anthony immediately began creating brand new and exciting illusions for a never before seen show.

October of 2015: Anthony opens his newest and most successful show, “Encore! Where the Magic Happens”, at the Fiesta Resort in Tumon, Guam where he continues to headline and wow audiences!

Anthony Reed is truly one of the last great illusionists in the world today. He brings the classic art of magic and illusion with a new twist. His performance will most definitely be remembered as “The Greatest Show You Ever Saw!”

Don’t miss the opportunity to bring this fresh, exciting performer to your stage!

Awesome website. Browsing on the listing using my mobile is quite addicting. I get to tag my favorite properties to review at my free time.
Amy Santos - MyZenda
Real Estate Pros website is as easy as ABC. It offers all the information I need in an organized manner that helped me decide on what property to consider buying. With a few clicks of a button, I was able to schedule a tour of the property and got a confirmation from the agent within an hour.
Juan Dela Cruz - Xtendly
Previous Next